An Alaska National Park as Big as Connecticut. Annual Visitors? 23,000.

Flying through Lake Clark Pass in a four-seater Cessna 206 (the fifth seat had been removed to make room for baggage), I felt like I had cheated some long-established rule: Visit a National Park on Memorial Day weekend and you’re required to sit in traffic hell for hours. But there are no roads into Lake Clark National Park and Preserve. Boats and planes are the only way in. Mine was a 170-mile flight from Merrill Field, Anchorage’s municipal airport, to the town of Port Alsworth.

Lake Clark was declared a National Park in 1980 as part of the Alaska National Interest Lands Conservation Act, in an effort to protect “multiple values,” including the waters that flow into Bristol Bay, site of the world’s largest salmon fishery, said Megan Richotte, Lake Clark National Park’s program manager for interpretation. The park is a veritable greatest hits of Alaskan landscapes and wildlife. It would take many lifetimes to hike all of Lake Clark’s glaciers, mountains, volcanoes and tundra; paddle all of the park’s lakes and shoreline; and spot the wide range of wildlife large — bears, lynx, eagles and wolves — and (very) small — collared pika and tundra shrew — that claim the area as home. And Lake Clark is also a culturally rich area, home for thousands of years to the Dena’ina Athabascan indigenous people.

Neither Tara, a frequent adventure buddy, nor I pack light. When traveling by bush plane, that will cost you. We overshot Lake and Pen Air’s 50 pounds-per-person packing limit by 50 pounds each. It came out to an extra $80 — and ended up being totally worth it. We were heading to the only public use cabin in all of Lake Clark’s four million acres — bigger than the state of Connecticut. All that space for about 23,000 visitors per year.

There are plenty of spots to camp in Lake Clark’s backcountry, as well as established campgrounds and more than a few lodges. But as soon as I found information online about the Priest Rock public use cabin, I knew it was where I wanted to stay. Alaska is peppered with public use cabins — most, like this one, for just $65 a night. They offer protection against cranky weather and nighttime bear worries (real and imagined). But unlike most cabins around the state, this single cabin in Lake Clark National Park had a backstory. 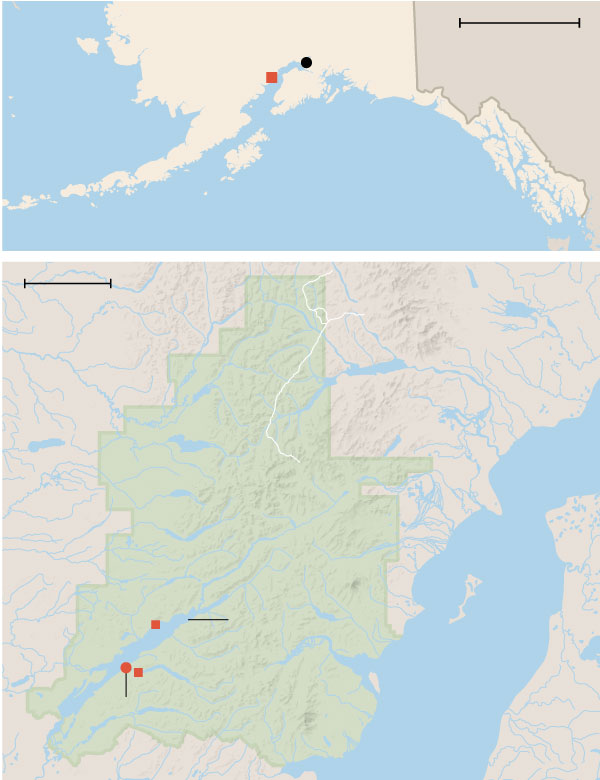 Outside of Alaska, the park is most closely associated with Richard Proenneke, who filmed himself while building his own cabin in 1967 and 1968. The 16-millimeter reels were later turned into the “Alone in the Wilderness” documentaries, which are frequently shown on public television. Though he was the only one who captured his cabin life on film, “there were many cabin-builders of that era,” Ms. Richotte said.

The cabin at Priest Rock “was built to be a home,” she said. “It was lived in and loved by the Woodwards for many years.” Allen Woodward, a pilot in Anchorage, built the cabin — his second at Lake Clark — in the mid-1970s. His wife, Marian, started spending summers there with him in 1986.

Public use cabins are not Airbnbs. Nobody leaves a tin of granola for you. You bring what you need and pack it out too; nothing left behind. Tara and I are both avid backcountry cooks, so webrought cookware,stoves and even a collapsible kitchen sink, along with real food, including the ingredients for a shrimp-heavy paella and garam masala-seasoned chickpeas and tomato. I also brought a backup meal of dehydrated pad thai, in case Alaska’s often unpredictable weather delayed our pickup. Tara had two fishing rods and her waders for catch-and-release fishing.

Our Cessna climbed away from the gridded layout of Anchorage and across Cook Inlet, the greenish aqua and silty river waters that feed it bumping up against each other. It was sunny and warm at the start of the 90-minute flight. A short time later, we dipped back into winter as we flew through the pass between the Neacola and Chigmit mountain ranges. The temperature dropped. Snow ruled the landscape.

We soon landed in Port Alsworth, which is more a busy hive than tourist destination, though there are several lodges. The town has a year-round population of 156. There are no restaurants or shops. On summer days, there’s a food truck that sells hamburgers and thick shakes. There’s also a new school, a Bible camp and a retreat for wounded veterans run by the evangelist Franklin Graham’s organization, Samaritan’s Purse. And, of course, Lake Clark National Park’s headquarters.

Beth Hill, an owner of Tulchina Adventures, a local outfitter, met us by the plane. She offered to hold our bags while we hiked the only maintained trail system in all of Lake Clark. We threw our gear into Ms. Hill’s beautiful bumper-stickered beater of a truck, grabbed our daypacks and bear spray and went off to explore.

Though rated “moderate” in difficulty, the two-mile hike to Tanalian Falls had just enough uphill to keep it from feeling like a stroll. White paper birch trees, thin layers of bark peeling off and waving in the breeze, lined the trail. The nonstop call-and-response of birds was our soundtrack as we descended the last bit of the trail. And then, through the sound of the waterfall growing louder with each step, we heard the blast of a giant whooping noise.

We continued down, watching for hurt animals, bears — anything that could make that noise. And then we saw backpacks on the ground. We guessed the whooping came from skinny-dippers, though they weren’t yet in view.

A minute later, standing by the waterside, I saw a flash of brownish-black fur running toward Tara. I started to yell “bear!” Then I saw the rest of the animal. Not a bear. A Karelian bear dog, its white front legs and bushy wagging tail upending my fright. The swimmers (Did I imagine they were blushing?) gathered their packs and headed off with the pup.

Tara and I went back to the trail to climb to the upper falls. We walked out onto the lava rocks for a better view: The frigid glacial water tumbled down 30 feet, sending spray into the air. We each took a spot on a flat area of rock, pulled out our lunches, and listened to the water roar. It was glorious.

Just after starting back, another flash of fur.

“Bear,” Tara said, steadily. There was no fear — the black bear was about 50 yards off. We were close enough to see it but far away enough not to be in his way. The bear wanted nothing to do with us. It disappeared into the trees.

We hiked back to town to meet Ms. Hill at her place. She loaded our gear, rental kayaks and two other Karelian bear dogs (it turned out the interloper was hers too) into the truck. I sat in the back on the cooler, happy to ride outdoors on the way to the lake, one of the dogs leaning against my legs.

After transferring our gear and kayaks (and the dogs) to Ms. Hill’s motorboat, we started the eight-mile ride to the cabin. On the lake, the mountains, rising up 6,000 feet and stretching along the shoreline, stole all my attention. Tara and Ms. Hill were deep in conversation but, sitting behind them, the wind whipped their words away before I could hear them. The whole day had already been a grand adventure that left me crazy happy, but now my giddiness was going into overdrive. These wild places are why I love Alaska so, and why, after 12 years of trips to Alaska, this Brooklyn-born, New Jersey-raised, East Coast die-hard moved here full time five years ago.

The 35-foot-tall rock in sight, it was clear where Priest Rock’s Anglo name had come from — “Looks like a priest’s hat,” Tara said, helpfully — as well as its much older Dena’ina name, Hnitsanghi’iy, which means“the rock that is embedded.”

Ms. Hill helped us carry some of our gear into the cabin. We made a plan to call her by satellite phone Sunday morning to check that all was well for our Monday pickup, and then she loaded the dogs back into the boat and took off.

The cabin didn’t just feel like a home; it was a home. While looking through a National Park Service book about the area, I was tickled to see that some of the pieces in the cabin — a print of a bathing man surprised by a visit from two bear cubs, a wooden stool with one of its three legs extending out at a sharp angle — were original to the place. Outside, there was an old wooden ladder and a weathered hand-built handcart with a busted wheel; a clean outhouse (with a fancy toilet paper holder bolted to the wall); an old rowboat, clearly loved and well used, a tiny chip of paint still showing up as bright aqua; and enough wood to feed the stove and fend off any chill for weeks, maybe months. I wanted to stay, to keep the rest of the world at bay.

After dinner, we played a card game or two and then both sat reading. I tried to, anyway. It was 8 p.m. and there were still three hours of light to go. The world had gone golden. I turned my chair toward the wall of windows that looked out onto the beaver slough between the cabin and the lake. Yellow-rumped warblers and other birds darted around. I would never need a TV if I lived here. The world outside the windows was all I wanted to watch.

That’s how it continued. We cooked meals, talked, went out on the lake in our kayaks, fished, wandered about, watched birds. Read. Watched birds again. This slice of Lake Clark National Park was all the world I needed.

Then it was time to go. We packed. We loaded the boat back up. We got on a slightly bigger plane and flew over turquoise lakes that made me want to scream that I wanted to go back. But it was time to go back to our real homes, the ones that pull our focus in too many directions.

Reserve the Priest Rock Public Use Cabin through recreation.gov; book well in advance. You have to pay upfront; the maximum stay is five nights.

Lake and Pen Air flies from Anchorage to Port Alsworth year-round. The round-trip flight is $498. For more information, visit lakeandpenair.com.

For information about visits to other areas of Lake Clark National Park & Preserve, visit nps.gov/lacl/index.htm.

Jenna Schnuer writes about travel, food and business. She is based in Anchorage.

Underwater Paradise at a Pacific Eco-Resort

What to Do in Australia’s Gold Coast

On a Civil Rights Trail, Essential Sites and Indelible Detours

On the Rug Route in Romania, Kilims and an Enduring Culture