It’s Hard to Believe, but Syria’s War Is Getting Even Worse

A Syrian Civil Defense member carrying a wounded child in the besieged town of Hamoria, in Eastern Ghouta, last month.

BEIRUT, Lebanon — Half a dozen newborns, blinking and arching their backs, were carried from a burning hospital hit by airstrikes. A bombed apartment house collapsed, burying families. Medics doused patients with water after a suspected chlorine attack, one of five in Syria since the start of the year.

That was just a fraction of the violence this week in northern Syria, according to residents and rescue workers, as the Syrian government and its Russian ally stepped up their air war on two of the country’s last major rebel-held areas.

“All types of weapons have been used on us for seven years, and the whole world is watching,” said Moaz al-Shami, an antigovernment activist in the north Syrian town of Saraqeb, where a medical clinic was hit as its staff was treating people wounded in a market bombing while buying potatoes. “In Saraqeb, we die twice.”

Since the rout of the Islamic State last year, and steady government advances against other insurgent groups, a misperception has grown abroad that the Syrian war is winding down. Instead, the carnage is reaching a new peak.

Since December, 300,000 people have fled new fighting. In one 48-hour period this week, government strikes killed more than 100 people, mostly civilians, according to rescue and medical workers, in the besieged, rebel-held suburbs just east of the capital, Damascus. The explosions could be heard and the smoke seen from the seat of power just a few miles away.

United Nations officials on Tuesday declared the situation “extreme” and called for an immediate nationwide cease-fire. The International Committee of the Red Cross decried the reported bombing of medical facilities in Hama and Idlib Provinces, where the majority of hospitals were already out of commission.

Just as two major government assaults on rebel strongholds were intensifying, Turkey launched a surprise invasion of a Kurdish border area, and suddenly there were three regions under fire, each creating a new emergency for civilians.

“There are multiple fronts where people are under extreme danger without a view to a solution,” Assistant Secretary General Panos Moumtzis, the United Nations’ regional aid coordinator for the Syria crisis, said Tuesday. “We haven’t seen this.”

The fact is that the Syrian war, for years, has not been just one war but a tangle of separate but intersecting conflicts with a rotating cast of combatants. Much of the world cheered the collapse of the Islamic State’s medieval-inspired caliphate last year. But that victory cleared the way for the war’s underlying conflicts to resurface with a vengeance.

In western Syria, government forces have turned their focus to a battle that existed before the Islamic State’s rise: the fight against an array of rebel groups aiming to unseat President Bashar al-Assad. Backed by Russia and Iran, the Syrian military is stepping up efforts to crush the largest remaining rebel-held pockets, taken over years ago by factions ranging from nationalist army defectors to the Islamist groups that now dominate them.

Moreover, the celebrations over the Islamic State’s defeat may have been premature. Many of its fighters have simply gone underground, joining sleeper cells and returning to hit-and-run guerrilla tactics in government-held areas.

Haid Haid, a Syria researcher at Chatham House, a Britain-based research group, said there were already signs that other insurgent groups also were using guerrilla strategies, setting off explosions in the government-controlled cities of Damascus and Aleppo. More will join those ranks as they lose territory, he said.

“We are talking about thousands of people, not hundreds,” he said.

The West has largely stepped back from the fight over Mr. Assad, tacitly accepting his continued rule and leaving Russia, Iran and Turkey as the most active foreign powers in the war. But the United States remains entrenched in a large part of northeastern Syria that American-backed, Kurdish-led militias seized from the Islamic State. 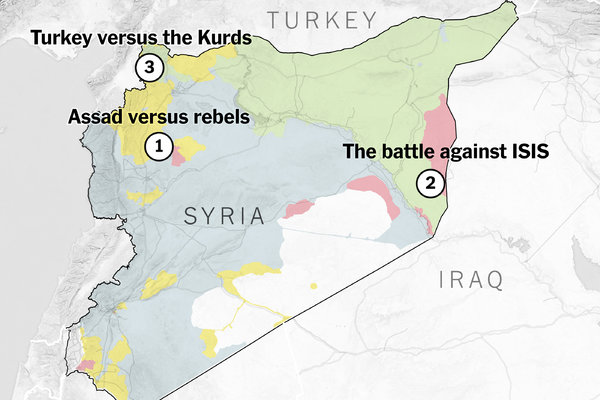 Why Is the Syrian Civil War Still Raging?

After nearly seven years, the war in Syria continues to defy attempts at resolution. It may continue for years.

For now, two very different rebel-held areas are bearing the brunt of attacks by government forces, supported by Russian air power and Iran-backed militias, including the Lebanese group Hezbollah.

One is the mostly rural province of Idlib, on Syria’s northwestern border, where the newborns were evacuated from a burning hospital last week.

Residents are digging trenches and weighing whether to flee.

Mohammad Najdat Kaddour, 32, said he was near despair after seven years protesting the government, dodging airstrikes and trying to build independent local organizations in defiance of jihadist groups that have dominated the province.

“Everything will be gone soon,” he said recently as government forces drew within a few miles of his hometown, Binnish. He blamed disunited rebel factions and their mistake of initially welcoming jihadists who later turned on them.

“If Binnish and Saraqeb fall, goodbye Idlib,” he said. “But we deserve that.”

Several people described villages emptying out, with seemingly only cats and dogs remaining.

“This is the result, an empty town,” said Mr. Shami, referring to Saraqeb. “The number of martyrs is just unnoticed news, but for people in this village, it’s the end.”

The history of Idlib in many ways is the history of the war. The province was one of the early centers of protest against decades of Assad family rule, and one of the first places where, after the government cracked down on the protests, people began to take up arms.

Some rebel groups there won the support of the United States and its allies. But foreign jihadists swarmed in, proving to be better funded and organized as they recruited Syrians. Idlib became one of the first Islamic State footholds. Local fighters ejected the group only to be later dominated by a faction linked to Al Qaeda.

The jihadists bolstered the government’s argument that it was fighting terrorism. Western support for the rebels weakened.

Idlib has another distinction as well: As government forces seized rebel towns, they frequently offered rebels and civilians the choice of surrender, with relocation to Idlib. The province is now home to two million people, half of them displaced from elsewhere in the country.

Others, like a landowner in Saraqeb named Maysara, have come and gone. He relocated to Turkey for a while, then returned and invested in a water bottling plant. It was bombed by government forces last week.

Still, Maysara, who asked that his last name be withheld for fear of reprisals, said he would take his chances with government rule rather than flee again.

The other rebel stronghold under assault is the cluster of working-class Damascus suburbs known as Eastern Ghouta, a jumble of unplanned concrete apartment houses and farms that has been cut off for years by a government siege.

The battle there has a different dynamic, a war of attrition with largely static front lines. The government has cut access to food and medicine for a population the United Nations puts at 400,000, half of them children. “A concentration camp,” the leftist Syrian dissident Yassin al-Haj Saleh called it.

But government forces have been unable to advance there lately, so they are intensifying the siege and bombardment.

On Tuesday and Wednesday, one of the worst barrages pummeled the area, killing more than 100 people. Residents posted photographs of a girl who had been killed, grinning in front of a wall of morning glories; a crying baby with his right foot blown off; and worse. An Agence France-Presse reporter described seeing five children, including his younger brother, killed by a bomb as they fetched water.

The rebels in Eastern Ghouta also have killed, on a smaller scale. They have shelled the Old City area of Damascus at least three times this year, killing 13 people, including several children, according to Syrian state media.

Since 2018 began, Eastern Ghouta has been the target in at least three suspected attacks using bombs laden with chlorine, which rarely kill but leave people choking. The use of chlorine as a weapon is banned under international law.

Ghouta was also the site of a 2013 attack in which sarin, a banned nerve agent, killed 1,400 people, including more than 400 children. The sarin attack led to a Russian-American deal to remove Syria’s chemical weapons arsenal. The Organization for the Prohibition of Chemical Weapons, which monitors compliance with the treaty that bans them, says it is investigating the recent suspected chlorine attacks.

According to Unicef, 12 percent of children younger than 5 years suffer from acute malnutrition in Eastern Ghouta. A brief cease-fire last month allowed 29 people to leave for medical treatment, but United Nations officials say at least 600 more require immediate evacuation. One of them, Amameh Yassin Darwish, 18 months old and suffering from cancer, died last week for lack of treatment, doctors said.

Even if the government retakes Idlib and Eastern Ghouta, that will not end the war.

International tensions threaten unpredictable new escalations like Turkey’s recent incursion on the northern border. Turkey aims to seize the Kurdish enclave of Afrin, and then press east to Manbij, where it would encounter American troops, who have vowed to defend it. Such an encounter could lead to an unprecedented armed conflict between two NATO allies.

The possibilities of Syrian battlefront clashes between the United States and Russia also have increased. The risks were underscored Thursday when the American-backed coalition said it had repelled an “unprovoked attack” in eastern Syria on Wednesday night by militia forces supporting the Assad government, and had responded with deadly airstrikes.

There were conflicting accounts of casualties, ranging from seven to at least 100, all believed to be members of a pro-Assad Syrian Shiite militia based in southeast Syria’s Deir al-Zour Province. But both Russia and Syria said the American-supported side had been the aggressor.

A rebel enclave still holds on in the south, supported by the United States and Jordan; the area is also a flash point for tensions between Israel and Iran as Hezbollah digs in near the Israeli-held Golan Heights.

The panoply of conflicts and warring parties has made the war resistant to international peacemaking. United Nations-backed peace talks in Geneva are stalled, and a “national dialogue” in Russia last week was stacked with Assad government supporters and appeared to be aimed at ratifying a military victory.

After seven years of fighting, an estimated 400,000 deaths and 11 million Syrians displaced from their homes — more than half the population — many international officials and analysts appear to be shifting to the question of how to rebuild Syria after what they see as the inevitable restoration of control under Mr. Assad.

Some European and Asian countries are already jockeying for contracts in the multibillion-dollar reconstruction, and Russia and Iran have already won infrastructure concessions.

Even if Mr. Assad’s position proves secure, the question then is how much longer and deadlier the war will be.

Kenya’s About-Face: Fear for Democracy as Dissent Is Muzzled